At 18 months of age, Sadie came to live with us in 1983.  She was owned by John and Nancy Janoch.  Sadie was a bouncy Boomer granddaughter.  John bought Sunday, Meadowpond Cherokee Sunday, a small red bitch and bred her to finished breed champion, Echo out of the Sun Dance kennel.  I watched her grow up and knew she was special.  John didn’t have time to give her the career she deserved, so he sold her to us back in 1983.

Sadie was supposed to be my dog, but she attached to Mike.  Mike decided to get involved with training and showing and so this became a very special match that only the two of them could understand.  Sadie never liked to train, but wow could she show and turn it on for the weekends.  Sadie hardly ever non-qualified and to this day still has more qualifying runs then any dog we have owned.  Sadie went from Novice-A to her OTCH in just under a year.  When performing the High in Trial presentation and demo in the group ring, Sadie would always end with a jump from heel position up to Mike’s shoulder and into his arms.

Sadie was in the National ratings for over seven years.  She earned 3, scores of 200, and 84 High in Trials and 1,906 OTCH Points Lifetime in AKC stats.  She also placed in eleven national tournaments, Gaines and the World Series.  She placed as high as 2nd in two of the Gaines tournaments.  Sadie also rated second in the AKC’s Top 25 OTCH Dogs of 1987.  Sadie became the top Golden Bitch and the Top bitch of all breeds as rated in the 1987 AKC Lifetime Stats.  Sadie appears in two different Golden Retriever books that showcase the top performance goldens in the history of the sport.

Not that this was ever enough, in 1986, Sadie was bred to the top producing golden, OTCH Meadowpond Stardust Reggie, Superdog winner, owned by Fred Einhorn.  Her litter of eight produced a record setting litter that held the record till 2009, 23 years.  In one litter she produced 5 OTCH/UDX titled pups. 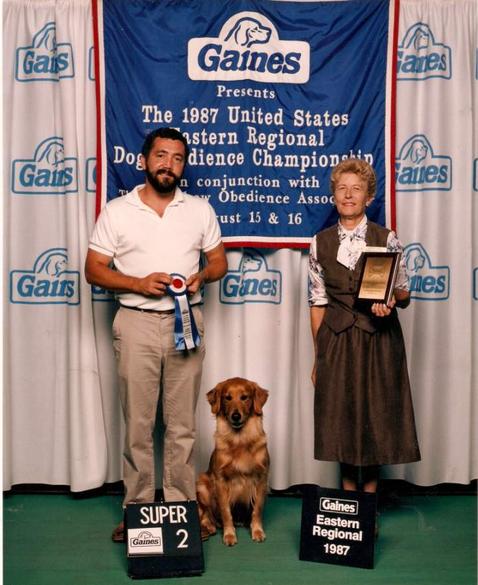