Miss Ellie was one of the youngest dogs I have ever shown. She had her OTCH at 2 years of age. She earned 33 High in Trials, 864 OTCH points and 6 tournament placements (Gaines & World Series). We had a special bond since I knew her from the moment she was born. At six weeks of age, I knew she would be my pup because she was so wild and over the top. I felt it would take special handling to achieve success with her. It was unfortunate that every weekend she had the challenge of trying to beat her mom, Sadie who was a legend and super competitive for many years. Ellie took many second places to her mom.

Ellie, a high drive girl would roll up the matting on her recall and also on her down in the drop on recall exercise. Never wanting to be dominated, she always needed help on her signal down and drop on recall. Can’t even remember how many drops she blew through without going down. The stays were always an issue because of her high anxiety. She was my first dog performing a new exercise “Moving Stand” after years of doing group stand & exams. I learned how to use resistance training to achieve the best Moving Stand exercise from Kay Guetzloff in just 5 minutes.

With all dogs come challenges and Ellie sure had some. Besides her high anxiety, at a young age she had recurring vaginal infections. Around 18 months of age she developed, at that time, a rare Autoimmune disease that almost killed her. If it weren’t for vet, Dr Christine Dresser and Dr Jean Dodds, I would have lost her. Jean was doing case studies at that time. The disease attacked her digestive track causing bouts of diarrhea and projectile vomiting her entire life. She lived on daily doses of Tylan powder for 14 years. She had a long life only to be out done by her brother Rocky who lived to be sixteen. 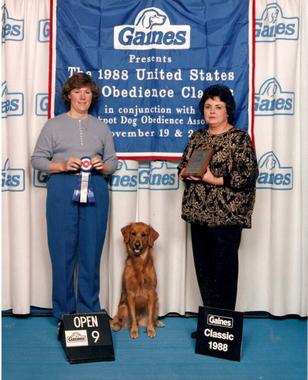