Rachel was the only girl out of the Crumpet X Reggie litter born 3/8/1992.  She was returned just before she was one year old.  Linda became the co-owner with Elaine Brent, One Ash Kennels.  Rachel lived with us for about 2 years.  After coming into heat very quickly, she began her training.  She was very smart and learned quickly and retained everything.  She just wasn’t very fond of showing.  Linda put the CD, CDX and UD titles on her.  She took a second place on her third UD leg from the Utility-B class.  Because she was beautiful, compact and passed all her breeding clearances, we decided that she should be retired to becoming a brood bitch in 1995 after earning her UD title.  Rachel became a GRCA Outstanding Dam.  She was bred 3 times and produced many good dogs.  Elaine allowed Linda to be very involved in choosing sire and also placing these pups in performance homes.  After her last litter, Rachel was then placed in a loving home with a lady in her 80’s.  The lady went to our vet, who called Linda when she lost her golden.  Rachel lived a long, happy and content life with her. 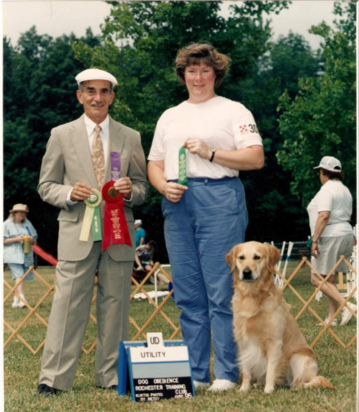