In 1978, after showing two poodles, I decided that the Golden Retriever was a better fit.  So I contacted Cherie Berger, Meadowpond Kennels of Michigan.  I saw a litter advertised that was out of her famous sire, Boomer.  He was throwing many fabulous dogs at this time and had the right pedigree for a golden with a brain which was not common at that time.  Well I knew it was the right litter for me since it was born on my birthday May 8th, 1978.  Cherie and longtime friend Jacquie Rowe puppy tested and picked out a beautiful red golden for me.  I call him my accident prone kid.  Always crazy, fast, reckless and full of injuries, we discovered he had hip dysplasia in both hips at 8 months of age. He had no sockets.  He moved beautifully, never limping and looked like a finished champion.   He was everything I wanted for showing and had such great drive, so I continued to train and show him.

Randy never non-qualified a sit & down stay his whole career. The only dog I owned that can claim this.  Randy never figured out the drop on recall exercise and it was always a surprise to him when I told him to drop.  This was a crowd favorite.  He hit the ground like a sack of potatoes, every time, making a loud thumping noise.  I never had a dog that did this so well. I began showing Randy in 1980, the year Mike and I married.  Mike would jog Randy for about 2 miles and hand him over to me at ringside just so he was calm enough to show.

Although Randy’s career was short, just six and a half years, He finished his OTCH with style.   Back then he had to jump 36 inches and the broad jump was 72 inches, so that limited his time in the ring with arthritis kicking in on his hips.  He was such a joy to show and had more perfect heeling scores than any dog I have owned.  He was always flashy and fun to watch in the ring.  He always retrieved no matter what.  At a young age,  he knocked down the entire ring gating while sticking his head through the gating to get his dumbbell that he had pounced on and kicked out of the ring.  All the judge could say was “Wow, what drive he has”.  Randy lived a long life finally dying of stomach cancer. 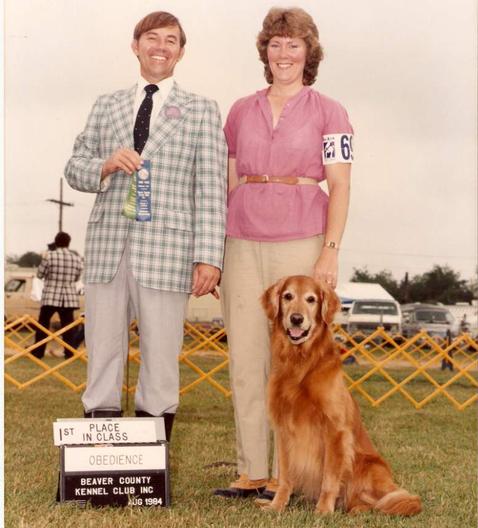