Lonie, Linda’s first poodle, a beautiful shiny Silver with blue highlights, was purchased for her by Uncle Bill Wilson from his friend Art Dartt of Beau-Nea poodle kennels.  Lonie was already two years old when Linda began his training.  Uncle Bill just wanted Linda to have a good dog because he and some other instructors at Cleveland All Breed Training club saw some talent in Linda.  Art also taught Linda how to groom a poodle and how to spend money buying all the required equipment.  Uncle Bill helped of course but Linda began grooming poodles to earn money to pay for lots of it.  Uncle Bill built her a grooming room at his house.

Lonie was Linda’s first dog to be shown in AKC Obedience.  With coaching from club members who befriended her, Linda learned how to show a dog and not make handling errors.  She also read many books, especially Blanche Saunders and Pearsal, to broaden her knowledge.  Lonie earned his CD and CDX in Canada and his CD in the states.  Lonie was also on the club’s very competitive “Scent Hurdle Relay Team”, but only second string. Lonie’s career was short since he developed early arthritis causing him pain when jumping.  When this happened, breeder Art Dartt, gave Linda a 1972 Christmas present.  A Christmas card with a photo of her newly born puppy, Dink born December 15, 1972 and not ready to come home yet. 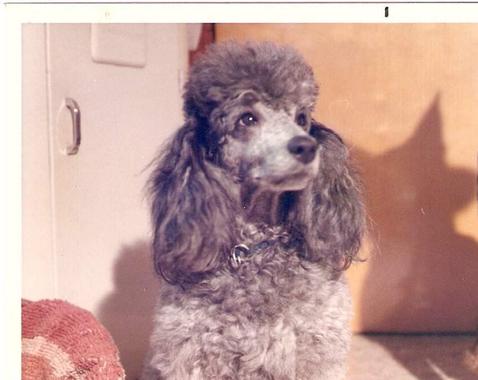