Ice, was born on Mother’s Day 1996. He was a nephew of our Sixpak. I was the co-breeder of a litter from our Rachel, One Ash Prix Caprilli, UD OD bred to CH Lemier’s Sunshine Bear, CDX OS. Ice was a happy-go-lucky personality, very easy to live with and travel with. He was always happy and went with the flow. He earned the nick-name “The Clown” because he always managed to do something totally silly. He had one of the most beautiful heads I have ever seen. After earning his CD and CDX titles, Ice let me know that he wasn’t interested in going on in obedience. So we tried field work. He had excellent marking and memory but refused to go near a dead duck. He preferred those birds we buy in the supermarket and only after they were cooked to order.

So we decided to try agility. At first he wasn’t sure he liked it, fell off the dog walk 2 times, wouldn’t go in the dark blue tunnel, was scared of the teeter and hated the table and would just keep jumping over it. It took many tries to get through our AKC Novice Agility titles. Then something clicked and Ice decided to love agility. He flew through his Excellent titles and actually had a 98% qualifying rate. So we went on to earn his MX and MXJ titles quickly. We then decided to try for the AKC MACH title. It was just a matter of time, shows and money because he always qualified. He earned his MACH on October 26, 2003. Since he was only seven years and in great shape, we decided to go for the new AKC Preferred titles. Ice earned the Novice, Open and Excellent Standard and Jumpers titles-6 titles, a total of 18 qualifying legs in 9 straight shows. He was then retired at the age of 8, still in excellent shape.

Since then he enjoyed swimming and lots of good exercise on our farm. Always a clown and always having fun. He was my good buddy. In November of 2009, he went off his regular food. We tried many things to keep him going. He never lost his joy for life till the very end. His beautiful head and soulful brown clear eyes remained until the end. At the age of almost 14, we decided not to put him through any more extensive measures and let him go. 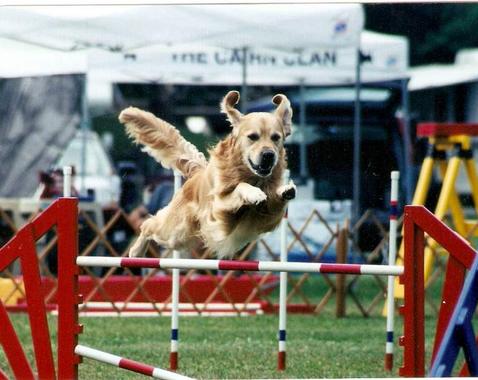