The dog that started it all for Linda. In 1971, a mix German Shepherd, Hobo brought Linda into the wonderful world of dogs. This is Linda’s first dog and he came from the city kennel where a couple of dogs from his litter were brought in. The kennel attendant tried to stir her towards another Shepherd but she fell in love with Hobo’s face. She thinks they had sedated him because after several hours at home he went into a rampage. He tore up everything possible.

After an ultimatum from my parents, a friend at work told me about Cleveland All Breed Training club at the Masonic Temple at E 36th street and Chester Ave. After Hobo destroyed a demonstration that night and then disrupted every class he was in, some generous folks at the club came to help. Armed with a problem solving book Linda quickly discovered that every chapter described Hobo’s many problems. By the time Hobo was in his third class, he finally quit breaking loose and doing the zoomies around the large Masonic auditorium.

Because Hobo was a mix breed, he could only be shown at fun matches. He was trained through the Open level exercises. My uncle Bill purchased a 2 year old mini poodle for Linda and she left Hobo with her dad who became his constant companion. 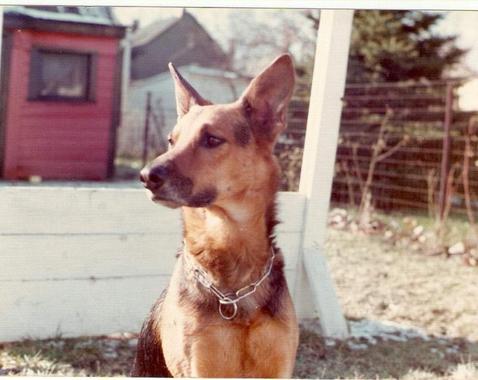