Georgie Girl, a female out of a breeding with our Sixpak and a bitch owned by Theo London of Michigan came to live with us after her owner, Theo passed away 8/19/98. After a family feud over the dogs for several weeks. A friend of Theo called us late evening 9/28/98 and said she had finally retrieved Georgie. Mike drove up to Michigan late that night to pick up Georgie. A big surprise in the mail awhile later were the AKC papers.

Georgie was a wild girl but pretty and compact and built for speed. Mike trained her and earned the CD and CDX titles on her. In June, 2000 Georgie was entered in the Detroit – Windsor World Series tournament in the Novice Division. She surprised Mike with one anticipated finish but still worked well enough to win the 10th.

Georgie passed away unexpectedly after bloating on 9/27/2005. The onset and severity were too great and she died on her way to the emergency clinic. Like everything else, she did that fast also. 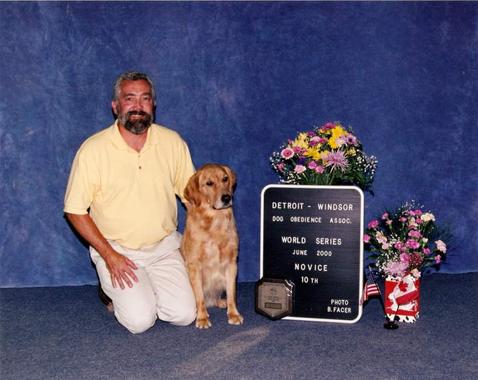