Linda’s second poodle, a mini Silver with a beige tint, Dink, a male, who was born on December 15, 1972 and was a Christmas present from breeder and friend Art Dartt. Dink was Linda’s first Utility titled dog. During that time, Linda attended every available seminar, read every book and magazine and worked with many instructors to increase her knowledge of dog training. Dink earned his American and Canadian UD titles. A challenge since almost all obedience trials were held outdoors. He competed at the World Series tournament in the Novice and Open divisions. In 1975, the AKC introduced the OTCH title. After trialing for a few more years, Dink did some winning however, the introduction of the AKC OTCH and the great dogs in our area took it’s toll. Linda was tired of all the grooming involved and all the outdoor shows and decided to get an all weather outdoor sporting dog. She decided on a Golden Retriever out of the top producing kennel for obedience, Meadowpond. So in 1978, Linda switched to the breed she came to love and it was a good fit for her. During this timeframe Linda was also an assistant instructor for Cleveland All Breed, working with Marge Sacerich, Irma Dixon and Dick Holcomb. Linda also cut her long hair and met her future husband, Mike. 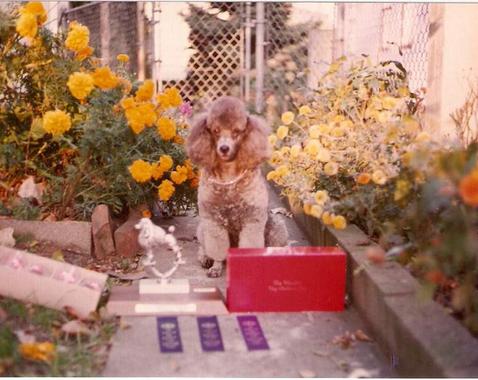