Can. CH Camrose In Oneash, CDX, Can CDX, GRCA-OD (Golden)

Crumpet was imported from the Camrose Kennel in England by Elaine Brent, owner of One Ash Kennels. During her young conformation career she came to live with the MacDonalds and Linda was registered as a co-owner. In a very short time, only 5 months, she was trained and earned her CD and CDX titles in 1990. She went to Canada to finish her Breed Championship. The handler’s 14 year old daughter showed her 6 times in obedience and Crumpet earned her CD and CDX, 6 legs in a row. Realizing her talent, she was very smart and retained everything, Linda asked that she be bred to a top obedience dog, Reggie. She was bred to Reggie for her second litter. This litter produced 4 OTCH/UDX and one UD dog making Crumpet a GRCA Outstanding Dam. One of those puppies was our famous Sixpak. 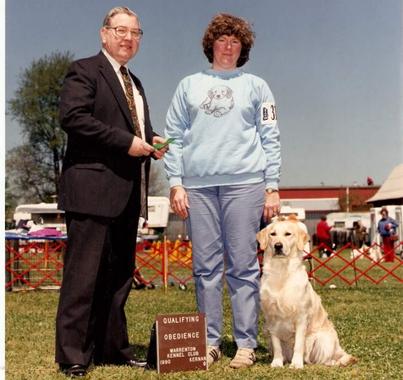