Bang came to live with us on Sunday, April 23rd during a blizzard and a long power outage. She was just 7 weeks old that day and must have wondered if she had moved to Alaska following a warm March. Mike had always admired Bang’s mom, Spy who is owned and loved by Sue Waite. We met Spy when she came to Cleveland All Breed to take the Attention Class that we were teaching. She was around 5 months old. Wow was she intense, focused, and smart. Mike asked Sue if she would like to sell Spy to him. Of course she said no! Sue said she was going to breed her and would keep in touch over the long winter months. Mike told Sue that he really wanted Spy and if she was in that litter he was interested. Sue said she really wanted Mike to train one of her pups and she would be thrilled to watch the career unfold. Sue is a great puppy raiser and did so many things with these pups. She knew all of them very well. She knew which one Mike should like. The girl marked in white kept following him around, to the creek, back up the hill to the house just trying to get his attention. She adored Mike, and looked up into his face even though she was very small.

Bang, a female Rottweiler started out in Rally earning her RN RA and RE titles and then her CD and CDX obedience titles quickly. Mike then got interested in Herding and earned her HT, PT and HSAs AKC herding titles while she earned her UD title in obedience. He then started Bang in Agilty in the Spring of 2010 at 5 years of age. She earned all her agility titles, Novice thru MACH (March 25, 2011) in less than one year and at the same time earned her obedience Utility (UD) title and her Herding Started Sheep (HSAs) title. In 2011, she became the number one Rottie, a position held by Bang’s mother, Spy for some time. In 2013, Bang earned her MACH7 title and is very close to her MACH8. Mike MacDonald & Bang, Rottweiler, earned their 200th Double Q (QQ in Masters)May 9, 2014.  This was a long time goal for Mike. She was then officially retired due to cancer in her right knee.

Bang was a beautiful and athletic Rottie with a shiny black coat and great personality. Always ready for doing zoomies around the farm and chasing a tennis ball till the cows come home. She spent her remaining time running and playing on the farm and swimming in the pool and pond as long as she could. She was Mike’s little Princess who owned the sofa and anything else she wanted. 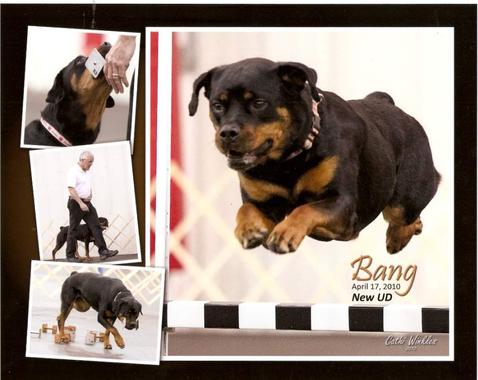